Post-trade: The growing need to invest in derivatives post-trade

Post-trade: The growing need to invest in derivatives post-trade

We need to talk post-trade : The problem with the status quo

Even before the spring 2020 volatility, the need to invest in post-trade infrastructure across the sell-side was becoming widely accepted. Investment in the back-office has lagged that of the front-office for decades. In some institutions, front-office systems capable of executing thousands of trades a second are sending those trades to back-office processing IT run on 20-year old platforms.

The reasons for the lack of investment in post-trade commonly stems from two major factors: the fact that the back-office is seen as a cost rather than a profit centre and that deficiencies in post-trade infrastructure have been tolerated and patched-up. Fixes, upgrades and enhancements have been frequently implemented, stitching new processes onto old processing systems and making do.

This has resulted in a status quo in which, while a large percentage of trades are processed on a STP basis, both within sell-side institutions and across the market, exceptions to non-STP processing may not be easily identified on the same day and are manually addressed on a T+1 basis. This results in a labour intensive and frustrating process, which can equate to thousands of tasks being picked up by operational staff, but one that is embedded and widely accepted across the industry.

Covid-19 exposed the weakness and stressed the system to the extent that executives are now yearning for a better world. They are looking to take advantage of recent innovations in post-trade technology and build a post-trade infrastructure fit for the modern world of high-frequency trading and extreme volatility.

The outbreak of volatility during the early spread of covid-19 in the US and Europe led to unprecedented volumes on global derivatives markets. As the VIX hit a record high of 82.69 on March 16 2020, investors scrambled to exit positions and hedge against the expected worsening of the virus.

Volumes soared across the globe. CME’s flagship Eurodollar contract traded 109m lots in March, Eurex’s Euro Stoxx 50 future 78m and options volumes on Brent crude and short sterling more than tripled year-on-year. According to data from the FIA, total global exchange traded derivatives (ETD) volume increased by more than 60% in March compared with 2019 resulting in a record 4.5bn contracts changing hands. This placed a significant strain on post-trade processing systems across the sell-side. An Acuiti snap survey conducted in the first week of April found that 58% of … 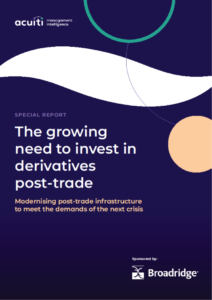 This extract is from a Special Report entitled ‘The growing need to invest in derivatives post-trade – Modernising post-trade infrastructure to meet the  demands of the next crisis’, which has been written by Acuiti, sponsored by Broadridge. Survey data in this report is based on responses and interviews with 109 senior executives across the sell-side. Respondents were from various roles within the organisation and were invited to participate  directly by Acuiti. Respondents were made up of Tier 1 & 2 banks (38%), regional and national banks (25%), non-bank FCMs (17%) and brokers (20%). Respondents were from Europe (42%), North America (31%), APAC (21%), ROW (6%).